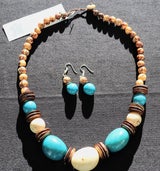 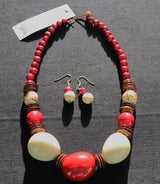 Upon visiting Ecuador, I became entranced with Tagua. It is beautiful, with natural swirls of color in it's ivory surface. Tagua is stronger than less sustainable alternatives and polishes up very easily.

By choosing Tagua, you are promoting sustainability within the rainforest. The trees are protected because of the Tagua nut production. There are many other benefits as well. Tagua is an alternative to ivory, and is stunningly similar in nature. It also provides jobs for local artisans in Ecuador, increasing the quality of life.

A little known fact is that in one year the Tagua palm tree can produce enough Tagua Nuts equivalent to a lifetime it takes for an elephant to produce as much ivory. "Tagua" (Tah-gwaa) is a word that generally refers to Phytelephas aequatorialis; a tropical palm that can grow as high as 30 feet. Tagua can be found throughout rainforest of Panama, Columbia, Ecuador and Peru. It tends to grow in swampy areas, shaded by the canopy of much larger trees.

The nuts vary from one to two inches in diameter, and are comprised of pure cellulose. Tagua nuts grow in bundles, with a single tree able to produce hundreds of nuts in a year. You are able to see the natural state of the Tagua nut bundles in the pictures. Initially when harvested, the nut is in a liquid-like state. The taste of the juice is similar to coconut water. After drying for a bit, the Tagua is more like a gel, and can be used to eat with other fruits. completely dry, they turn rock hard.

The tagua is very dense, close-grained, and strong. Tagua is used in the production of chess sets, buttons, dominoes, dice and many other items. In the early 19th century many buttons produced were made of Tagua. In later years, Tagua fell out of favor in production due to the rise in demand of other cheaper, artificial materials, but has made a comeback as of late.

I hope you love Tagua as much as I do, and enjoy knowing that you are supporting a harmonious and equitable Fair Trade product affecting thousands of artisans in Ecuador.

Caring For your Tagua Jewelry

Tagua is a very hard, durable substance, but it is sensitive to water. These tagua pieces have been coated in a clear varnish, but are NOT safe submerged in water. Do not shower or swim with tagua. Water can corrode the design and possibly cause the piece itself to warp or even crack, if exposed to water for extended periods of time.

Tagua produces a patina over time, which is normal and part of it's aging process. Some tagua stay bright white and some turn a rich, dark ivory — each slice is unique. Tagua can be polished by hand with beeswax and buffed to a shine. I recommend polishing no more than once per year, and in doing so you are able to make your unique piece of jewelry look brand new again!