The Black Hills is a sanctuary for a variety of wildlife, both big and small. This is their home, and has been for thousands of years. The Black Hills provides a place where animals of all kinds can roam, forage and be free. It's important when entering the Black Hills by car to drive slowly, keep a keen eye open and enjoy the natural beauty. You'll no doubt be surprised at the "critters" throughout the different geological regions of the Black Hills.

There are some of you that enter on foot, and in this case rely on all of your senses. Sight, smell, sound and feel. Proceed gently through the Black Hills and realize that this is the home of all animals, with you being the guest. Most of all, don't approach wild animals, especially the American Bison or Elk as you'll find yourself on the losing end of the stick. Enjoy your time here, respect mother nature and take it all in. This is a special place and has a different effect on those that visit. 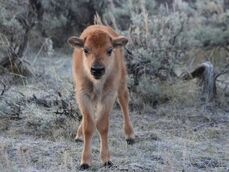 The American Bison is the number one animal that visitors from all over the world come to see, and as of May 9, 2016 has become the national mammal of the United States! In this picture is a "Red Dog", or a baby Bison. They're super cute, and have a rusty red hue in their early months of life.  Baby Bison are born somewhere between March and June, but we've seen them as late as September. These little guys like to play, not unlike puppies. You can see them chasing each other around, and but not too far from mother's watchful eye. You might feel like approaching one of these cute fluffy creatures, but this is ill advised. Many people have felt the wrath of their mothers and have been seriously injured. 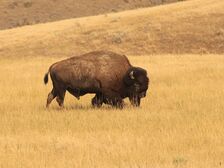 The male Bison (bull) can weigh up to 2000 pounds and stand up to 6 feet tall! You'll understand just how large these animals are from the safety of your vehicle or on our Southern Black Hills Tour. They are the megafauna of the Black Hills. It's estimated that somewhere between 30 and 60 million of these majestic creatures roamed the plains before settlers arrived.

​The female bison (cow) weighs up to 1000 pounds and stands between 4 and 5 feet tall. The rutting season is between June and September, with the height of the action in July and August. During this time, males compete for the females who begin breeding at 2 years old. The "competition" takes place out in the open and the bulls will lock horns, aggressively shoving each other back and forth until one finally stands down. You can hear the males make grunting and bellowing from far off. This is also the most dangerous time of year for visitors.

​The Bison are aggressive and looking for a fight. Never get within 25 yards of these guys. Each year visitors push the limits of these boundaries and unfortunately there are consequences. A qualified guide ensures you learn as much as possible about the American Bison, get the best views, and remain safe while doing so. 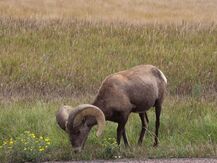 ​Bighorn Sheep are acrobats of the Black Hills and Badlands. While you can see them out in the open, more often they are on craggy hillsides, at the edge of a cliff, or high on a spire in the Badlands. Bighorn sheep are either Rams (Male) or Ewes (Female). The rams are typically 110-250 pounds with curled horns that weigh up to 30 pounds on their own. These animals are herbivores and their range is from the Canadian Rockies to the arid deserts of the Southwest United States. They look a lot like goats, which are a close relative.

Their acrobatics comes from the design of their hoofs, having a split in them with rough bottoms. You'll see these creatures in the most precarious of positions, which can make a beautiful photograph if caught at the right moment. Many of the Bighorn sheep are tagged throughout the Black Hills and Badlands in order for the Park Service to monitor their health. Recently, there has been a bout of pneumonia in a few of the heards and sadly, they have to be put down to prevent the spread. Park Rangers are working closely with experts to contain the virus.

These guys and girls are social in nature, but they typically are found in groups of males (bachelor herds) and the females live in groups together with the young. The males and females only get together during mating time, after the Rams have battled it out for dominance. In Custer State Park you can see them along ridgelines, out on the rolling hills and even at the visitors center if you're lucky. In the Badlands, the best place I've found is right at Pinnacles overlook and down Sage Creek Rim Road. It's almost a guarantee you'll see them at these two locations if you get there about an hour before sunset. The lambs are born in the early spring. After about a week you'll see them out playing and exploring this wild new world they've been brought into. Just like any other wild animal in the parks, they should be treated as such and given distance. Please do not try to feed the Bighorn Sheep as they have plenty to munch on in nature. 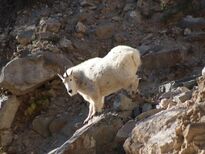 Perhaps these are my favorite. Each time I see a mountain goat it's like a mystical creature has decided to reveal itself for the first time, and you're the lucky winner. I swear, they make quite the spectacle. Their bright white color does anything but blend into the background during the spring, summer and fall. They stand out, but only when they want to. Like the Bighorn sheep, these guys can go pretty much wherever they want, but one of the best places to see them is at the Cathedral Spires. Specifically, the Needles Eye Tunnel. Both bighorn Sheep and mountain goats like this location because water trickles down inside the tunnel, collecting minerals and salts as they do. Sheep, goats and other animals look for this type of water as it's essential for survival.

Oddly enough, the mountain goat isn't native to the Black Hills. There were 6 original goats given to Custer State Park from Canada as a gift. In the early years of the park there was once a zoo containing a variety of animals, including the mountain goats. They arrived in 1924 and on the first night 2 escaped with the rest soon thereafter. It didn't take long for them to reach Black Elk Peak, which provided excellent protection. The original 6 are responsible for the population reaching upwards of 400, with around 200 in the wild today.

Mountain goats can be found near Mount Rushmore, Black Elk Peak and the Cathedral Spires. Keep an eye out and you might get lucky along the way! 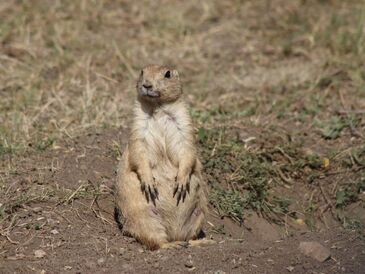 The Prairie Dog is one of the most beloved creatures of the Black Hills and Badlands. Choosing a Black Hills tour company that knows exactly where these chubby little buggers exist is a smart thing to do. Prairie dogs can be found in the Black Hills, as well as Badlands Tours. Related to the squirrel, they look similar but there are some important differences.

First off, the Prairie Dog lives underground. Yes, there are ground squirrels but the majority live above ground and have different characteristics. Prairie Dogs are considered a keystone species. This means if they were to disappear from the environment in which they live, quite a few things would collapse as a result. The Prairie Dog is at the bottom of the food chain, and that means a variety of animal species depend on their survival. They also create an interesting habitat. When Prairie Dogs gather in large numbers and build their underground homes, this becomes what is known as a "Prairie Dog Town". How can you tell if you've come upon this wild west town of critters? Well, look around for dirt piles in cone shapes, about 3-5 feet in diameter. You'll find them in open prairies and with a keen eye, you'll see that the smooth prairie with uniform plants becomes more "chunky" looking. Bumps, along with mixed flowers and weeds will exist around a prairie dog town, rather than uniform grasses.

This is because when a prairie dog builds its home, it flings up dirt from the ground creating these mounds. That exposed dirt is the perfect ground for wildflower seeds and weeds to sprout from, making it perfect munching grounds for elk, antelope, and bison. Watch out though, the entrances to their homes are large holes that can go straight down, making it a hazard for both animals and humans.

One animal, the Black Footed Ferret depends almost solely on the prairie dogs existence. Not only will they feed on these prairie dogs, but they take over their homes. While visitors and animal lovers adore the prairie dog, ranchers feel they are a nuisance. They hunt the prairie dogs to prevent their cattle or Bison from stepping into a hole and breaking a leg. It's a good thing we have protected areas within the park boundaries to protect these important creatures from harm.

One last thing to ponder is the prairie dog has a language. They're called "dogs" because they supposedly bark. I think they chirp, but if the car is shut off and you listen carefully you'll be able to make your own determination. Regardless of what you call it, this is their language. Studies have determined that prairie dogs can warn others in the group of what type of animal or danger is approaching. For instance, they can speak the difference between a human and buffalo, or a ferret and a hawk. Some say they can go even further, by using adjectives such as the color of the danger, such as a human in blue. Stick your head out the window and see if you can communicate with them, then let us know what you find!

You can see these guys on a black hills tour company guided excursion with us, or on one of our Badland Tours.